Nearly every picture book I’ve created has a snail hidden inside as a tribute to my first picture book, Tiny Snail. As I researched sea snails for “Sea Horse, run!”  I had to include the Violet Snail (Janthina janthina) because it loves to surf. 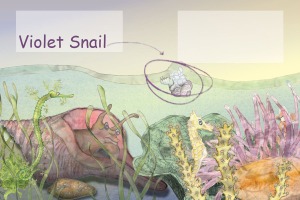 Violet Snails are rather small. They only grow as large as 1.2 inches, but they like to live near the top of reefs so they can quickly hitch a ride with a wave. This amazing little snail surfs with bubbles. In fact, the Violet Snail can build a “raft” out of bubbles, and by clinging to his bubble raft, a Violet Snail can float to the surface of the water and travel for hundreds of miles from one reef to the next. Surely this makes the Violet Snail the most widely-traveled snail in the world.

In “Sea Horse, run!” the Violet Snail is seen on page 15 hitching a ride a with a wave in order to flee the approaching Sea Dragon. Although the Violet Snail only appears on two pages in my book, he is making many appearances lately in the news due to some groundbreaking work by scientists. A team of researchers led by University of Michigan graduate student Celia Churchill reported their findings October 11th in the journal Current Biology. The Violet Snail is featured on the journal’s cover, and Celia Churchill says the bubble raft (which has the consistency of bubble wrap) is actually a modified version of an egg packet. 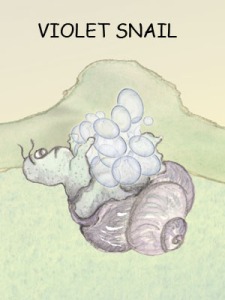 My favorite article is “Snails Ship Out On Scrambled Eggs” at Science NOW online.

Additional news with great photos is on-line at MSNBC News October 10, 2011.
The same article (“Snails Sail Through Life on Mucus Bubbles”) is published at livescience.com.

Here is an older article about Violet Snails…

October 20, 2008, National Geographic: How Snails Walk on Water is a Small Miracle